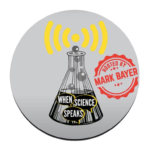 This week’s episode of When Science Speaks features Edward Duca, Ph.D. and Amanda Mathieson, M.Sc., science communication experts who are leaders of an innovative program on the island nation of Malta called STEAM (Science Technology Engineering Arts and Math).

Ed is a Science and Innovation Communication Lecturer at the University of Malta, co-runs the science communication STEAM Summer School, is involved in several large EU funded projects, and has created and managed several science communication events through an NGO called the Malta Chamber of Scientists, the largest activity being the national science and arts festival “Science in the City”, which attracting 6% of Malta’s population annually.

Ed has recently been appointed as Rector’s Delegate for STEM Popularisation (Engagement) and EUSEA board member. His aim is to continue developing transdisciplinary research and activities to develop evidence for the effective communication of research that will encourage a scientifically aware society leading towards an informed democracy and active citizenship. He wants to embed a culture of public engagement and research that benefits society.

Amanda Mathieson has an undergraduate degree in Plant Science and a masters in Science Communication, both from the University of Manchester. She has worked in a number of universities around Europe, engaging the public with science through the arts and currently works at BiOrbic, a bioeconomy research centre based in University College Dublin. Her speciality is theatrical STEM escape rooms that explore science through exciting puzzles.

We discuss a range of topics related to the training STEAM provides in communicating science through the arts, with a particular focus on performance skills, including:

The impetus for starting the STEAM program, which has been operating for several years now

Why Ed and Amanda believe performance skills are vital for effectively communicating science, particularly since scientists, journalists, and others involved in scientific careers may not consider themselves “performers” per se

Whether scientists have a particular affinity or talent when it comes to the arts generally?

What’s surprised Ed and Amanda In working with participants at the STEAM Summer School over the years?

Besides registering for and attending STEAM Summer School, what’s one thing listeners could do today to improve their science communication abilities through the arts

Resources mentioned in the episode: